My Rhapsody: Zak Barry talks of feeling grounded and finding his great white buffalos at Rhapsody CrossFit in Charleston.

What is your story? 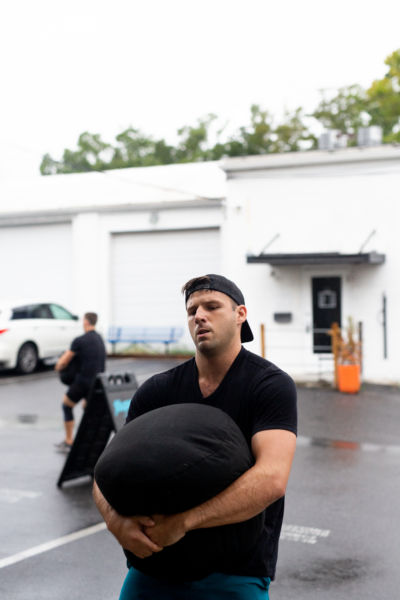 I found myself in a new city, on the other side of the country from my family and friends.

Having grown up being a cross-country runner, fitness has always been a staple in my life. Usually the first thing that I do when I get to a new town is run around and learn the city. Although there aren’t quite as many hills in Charleston as there are in the Pacific Northwest, I made sure to run the bridge as often as possible.

What brought you to Rhapsody CrossFit?

Charleston is a foodie town, and I had gotten my fair share of enjoying what King Street had to offer. Turns out, all that food and beer isn’t exactly the healthiest thing to be consuming all the time (as good as it is).

While I was running down King Street in early April, I saw some people coming in and out of the gym. Everyone looked fit, and, somehow, looked like they were having fun.

I had done CrossFit in Washington for a while, so I wasn’t quite afraid of it …but it had been a while since I had lifted or worked like that, and I hadn’t exactly been taking care of myself. I joined out of a desire to get into a better habit pattern, and maybe make some friends along the way.

What have you gotten out of your experience with Rhapsody CrossFit?

It’s difficult to explain it all but a couple things that I have gotten from Rhapsody are a consistent outlet for working out and relieving stress.

I found a new group of friends that grows with every day. I’ve even been able to put up some personal records every once in a while.

I also have a set class time that forces me to leave work at 5PM everyday rather than getting “stuck in the matrix” and staying there forever, which I’m known to do.

What has being a part of the Rhapsody CrossFit community meant to you?

The Rhapsody community grounded me. It made me feel like I had a family in Charleston. This was huge to me.

I move once every three years, so setting roots is difficult. Finding “civilian friends” in the military aviation community is like finding a great white buffalo, but it means the world.

Since I am constantly travelling, it’s difficult to maintain relationships with people who don’t understand the lifestyle. This didn’t matter to the community at Rhapsody. The only thing that matters to them is that I show up, have a good attitude, get up to the bar, grip it and rip it.

Through Rhapsody, I found my first community that wasn’t directly related to the military. To the “Ratchet Rhapsody” crew that took me in when I needed it most, you were life-saving. Now we have a close group that thrives on pushing each other physically, and mentally, while also causing quite a bit of chaos in class.

Be strong, stay healthy and let some Rhapsody into your life. To learn more about Rhapsody CrossFit in Charleston and our wide range of programs, get in touch with Team Rhapsody today.